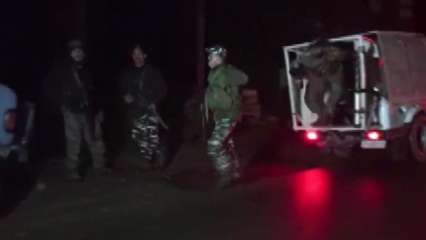 In a shootout that took place in the Kulgam district of Jammu & Kashmir on Sunday (October 17), three non-Kashmiri citizens were killed by terrorists who were residents of Bihar as per the Crime Investigation Department (CID).

As of now, the Jammu and Kashmir police and other security forces have cordoned off the area.

According to the Kashmir Inspector General of Police (IGP), Vijay Kumar, at least 13 terrorists have been killed in as many as nine encounters between security forces and the terrorists in Jammu and Kashmir after a spate of targeted civilian killings in the UT is being witnessed.

“Terrorists fired at two non-local labourers in Srinagar and Pulwama. Arbind Kumar Sah from Banka in Bihar died in Srinagar and Sagir Ahmad from Uttar Pradesh is critically injured in Pulwama. Areas have been sealed and searches are on,” has said the local police.

Jammu and Kashmir Lieutenant Governor Manoj Sinha took to Twitter and wrote, “I strongly condemn the brutal killings of Arvind Kumar Shah and Sagir Ahmad by terrorists. My heartfelt condolences to the families who have lost their loved ones. UT government stands in solidarity with the bereaved families in this hour of grief.”

Disciples remember Shiben Banerjee in a musical way in Guwahati