UPLA disbands itself after 8 years of armed struggle

Priyanka Gandhi to be UP CM face from Congress? Here’s what… 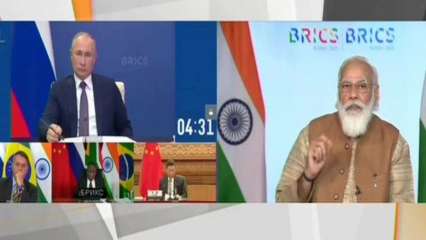 The Afghanistan crisis will be one of the key focus at the 13th BRICS summit to be hosted by Prime Minister Narendra Modi on Thursday. BRICS– or Brazil, Russia, India, China and South Africa’s leaders will be meeting virtually for the summit, and it is for the 2nd time in a row the meet happens virtually due to the COVID-19 crisis.

It is learnt that the leaders are expected to underscore the priority of fighting terrorism, including preventing attempts by terror organizations to use Afghanistan as a sanctuary to carry out attacks against other countries. Worry over Afghanistan becoming safe haven for terror groups, especially Pakistan based international terror groups like LeT, JeM has been the message from New Delhi to many of its partners including Russia, which is a BRICS member country.

The BRICS grouping as a whole will also focus on the need to address the humanitarian situation and uphold human rights, including those of women, children and minorities. After the fall of Kabul to the Taliban on 15th August, the humanitarian situation has worsened with the International Committee of Red Cross chief warning of the collapse of the health system.  The BRICS summit comes days after the Taliban announced its govt, which had no representations from women, and almost negligible representation from minority groups like Tajiks and Hazaras.

India’s chairmanship of BRICS coincides with the 15th anniversary of the grouping, with key priorities being reform of the Multilateral System; Counter-Terrorism Cooperation; Digital and Technological Tools for Achieving Sustainable Development Goals and Enhancing People to People Exchanges.

Under India’s presidency, till August, India has conducted close to 100 events and meetings. India is expected to organize around 150 meetings and events, including 23 Ministerial level and 46 Senior official and Working level meetings.

Earlier this year, the BRICS foreign ministers meeting saw the adoption of the Joint Statement on ‘Strengthening and Reforming of the Multilateral System’ calling for reforms of the current multilateral system, including the UNSC. The BRICS NSA meet saw the adoption of an Action Plan to implement the BRICS Counter Terror Strategy. As part of this strategy, BRICS has committed to combating terrorism, including the cross-border movement of terrorists, and terrorism financing networks and safe havens.

Netflix only paid $2 to buy ‘La Casa de Papel’? Find out why