Global Reliance On China To Remain

Cut Down Forests To Create Coalfields 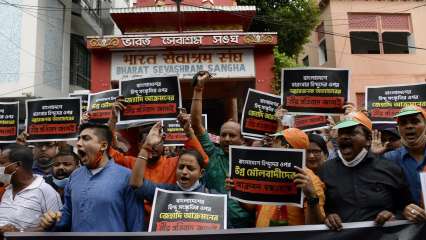 Amidst the ongoing communal violence in Bangladesh, fundamentalists have once again targeted Hindus. During the Durga Puja festival last week, a group of assailants torched 29 houses of Hindus amid protests by the minority community against the demolition of the temple, news reports have claimed

According to a report by BDNews24.Com, houses of Hindus were targeted in a village of Peerganj in the Rangpur district late on Sunday night.

The report quoted Rangpur SP Mohammad Kamarujamman as saying that a Facebook post spread a rumour that a young Hindu man from the village had “insulted the religion”, after which the police rushed there. The police were reportedly stationed outside the man’s house, while the attackers set fire to other houses. The fire control room said 29 houses, two kitchens, two barns and 20 piles of dry grass were set ablaze in the Piroganj Majhipara area. It has also been said that an ‘uncontrolled mob’ had started the fire.

The report mentions that the fire department got information about the fire at 9.45 pm on Sunday night and the fire could be brought under control by Monday morning. There is currently no news of any casualties in the incident. According to the information, the incident of setting fire to a Durga Puja pandal in the Comilla area due to communal tension spread after alleged blasphemy. The incident in the Comilla area last week led to attacks on Hindu temples and clashes between police and attackers in several districts including Comilla, Chandpur, Chattgram, Cox’s Bazar, Bandarban, Maulvibazar, Ghazipur, Feni.

After the attack, many people have been reportedly arrested for spreading communal hatred on social media.

On the other hand, Minister of Home Affairs of Bangladesh Asaduzzaman Khan on Sunday termed the attacks on Durga Puja pavilions as ‘pre-planned’ and said these attacks were aimed at destroying the communal harmony in Bangladesh.

This came after multiple cases have been filed against hundreds of named and unnamed people for the attacks in Comilla on Wednesday, Dhaka Tribune reported.