Centre assured to give due respect to Naga flag, say NNPGs 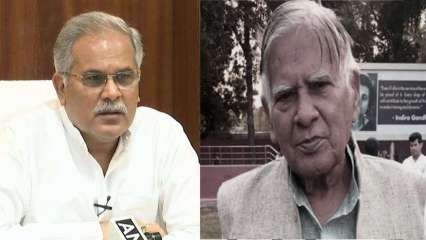 Nand Kumar Baghel, father of Chhattisgarh Chief Minister Bhupesh Baghel has been arrested over his alleged remarks against the Brahmin society. A case was registered against him at DD Nagar police station in Raipur in this regard. The video of Nand Kumar Baghel’s controversial remark is going viral on social media.

A police officer said that on the complaint of ‘Sarva Brahmin Samaj’, the police of DD Nagar police station had registered an FIR against 86-year-old Nand Kumar Baghel late on Saturday night. The officer said that the case has been registered under section 153A (causing enmity between different groups on grounds of religion, caste, place of birth, residence and language) and section 505 (1) (B) of the IPC. In the complaint, the organization alleged that recently, the CM’s father had appealed to the people to boycott Brahmins by calling them foreigners. He also reportedly called upon the people not to allow Brahmins to enter the village.

According to the officer, Nand Kumar Baghel allegedly appealed to the people to “expel Brahmins out of the country”. The organization, in its complaint, said the video of the alleged remarks made by the chief minister’s father is available on social media, informed the officer. As per the police, Nand Kumar Baghel made the alleged remarks while addressing an event in Uttar Pradesh recently. After the controversy arising out of the father’s remark, Chief Minister Bhupesh Baghel also had to clarify and he said that he is very saddened by the father’s remark.