China hit by massive power cuts due to shortage of coal…

BSF APPREHENDED 02 BANGLADESHI SMUGGLERS ALONG THE WITH… 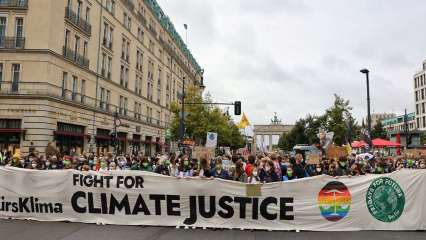 Even as the world leaders meet at the 76th UN General Assembly session in New York today, pressure is mounting on them to address the climate change issue. Global climate change is expected to be on the top of the agenda at the UNGA.

Pleas for making deeper cuts in emissions of heat-trapping gases and providing poorer countries with more money to develop cleaner energy will be on the list of discussions. It is expected that Indian Prime Minister Narendra Modi will address the climate change issue with many other issues when he speaks at the UNGA today.

“I’m not desperate, but I’m tremendously worried,” UN Secretary-General Antonio Guterres said ahead of UNGA. “We are on the verge of the abyss and we cannot afford a step in the wrong direction,” he was quoted as saying.

UK Prime Minister Boris Johnson and UN Secretary-General Antonio Guterres on Monday hosted a session with 35 to 40 world leaders to get countries to do more on climate change. The crucial COP26 climate summit will be held in Glasgow in six weeks.

The biggest challenge however will be to make wealthy countries honour their UN climate fund pledges. China is the world’s biggest emitter of carbon dioxide. But Chinese President Xi Jinping has not yet confirmed his attendance at the conference.

The destructive droughts and rising sea levels caused by climate change are directly linked to security issues in small island nations. The world has witnessed severe heatwaves, devastating wildfires and floods this year which experts believe is due to climate change.

Meanwhile, US President Joe Biden convened a private forum on climate to coax leaders to act now. During the meet, Biden said that the United States seeks to double climate change aid for developing nations.