The Poor Deserve Much Better! 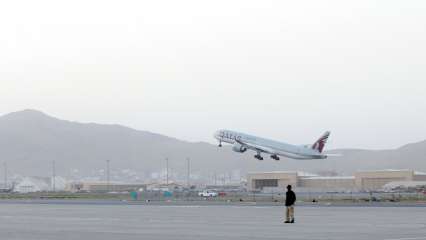 The US National Security Council (NSC) on Thursday confirmed that the chartered Qatar Airways flight from Hamid Karzai International Airport (HKIA) has successfully landed in Qatar.

The flight has carried US citizens and lawful permanent residents from Afghanistan, which has been seized by the Taliban to Qatar.

“We are deeply grateful to the continued efforts of Qatar in facilitating operations at HKIA and helping to ensure the safety of these charter flights, NSC spokesperson Emily Horne said in a statement.”

We have been working intensely across the US government to ensure the accuracy of the manifest and the safe departure and transit of the aircraft, and today’s safe flight is the result of careful and hard diplomacy and engagement,” the statement added.

Meanwhile, White House Press Secretary Jen Psaki also remarked on the evacuation and said, “The plane just landed. US in process of determining exactly how many Americans got out of Afghanistan on a Qatar airways charter flight from Kabul’s HKIA to Qatar.”

Psaki also said, “Taliban has been cooperative on getting out of Afghanistan both Americans and Afghans who worked for us”.

Asked if there were additional flights that will take off from Kabul, she said: “We’re not as a policy going to confirm flights in advance. We’re going to wait until these flights are safely on the ground.”

“We are hopeful and working to ensure there are additional flights out of Afghanistan for Americans, US permanent residents & Afghan partners/SIVs,” Psaki said.

The NSC also informed that the US will continue these efforts to facilitate the safe and orderly travel of American citizens, lawful permanent residents, and Afghans who worked for the country and wish to leave Afghanistan.

“Because there is an ongoing terrorist threat to operations of this nature, we will not be sharing details of these efforts before people are safely out of the country,” the statement also said.

The US has evacuated 6,000 American citizens and lawful permanent residents home to the United States under Operation Allies Welcome thus far.