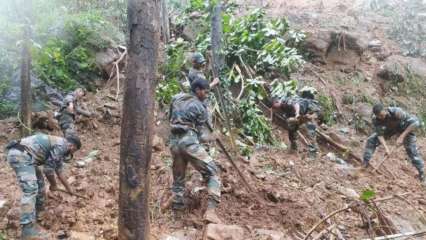 The death toll from landslides and floods in Kerala caused by heavy rainfall has now risen to nine, as over a dozen of people are still missing. Three more bodies were recovered from Kottayam district’s Koottikkal after landslides happened due to heavy downpours, news agency ANI reported.

Union Home Minister Amit Shah said that the central government is continuously monitoring the situation and will provide all possible help in Kerala. He said in a tweet, “We are continuously monitoring the situation in parts of Kerala in the wake of heavy rainfall and flooding. The central govt will provide all possible support to help people in need. NDRF teams have already been sent to assist the rescue operations. Praying for everyone’s safety.”This comes after four people on Saturday died in Kottayam district while two more casualties were reported from Idukki district, said Water Resources Minister Roshi Augustin today.

The two districts have been bearing the brunt of heavy rainfall as Kerala has been witnessing rains since Friday. Many people are feared missing in landslides.

Kerala Chief Minister Pinarayi Vijayan held a high-level meeting to intensify rescue efforts. All means will be used to evacuate people stranded in flooded areas in the state, he said.

To help in rescue people stranded in floods,  11 National Disaster Response Force (NDRF), two Army and two Defence Service Corps (DSC) teams have been deployed in the south and central parts of Kerala.

State Minister K Rajan said, for people stranded in Kottayam, “Army and Indian Air Force are on stand-by for assistance. We will provide all help to those in need.”

The Indian Meteorological Department has issued a red alert in Pathanamthitta, Kottayam, Ernakulam, Idukki, Thrissur while an orange alert has been issued for Thiruvananthapuram, Kollam, Alapuzha, Palakkad, Malappuram, Kozhikode, and Wayanad districts in Kerala.