After Kapil Sibal’s ‘Congress is devoid of…

Suicide within 30 days of testing positive to be treated as… 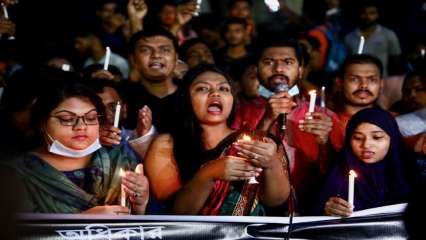 The death toll in Bangladesh communal violence rose to five on Tuesday after another person succumbed to his injuries after clashes between police and attackers at the Lakshmi Narayan Akhra temple in Chandpur’s Hajiganj Upazila.

According to earlier reports, at least three people were killed and 60, including journalists, police, were injured in the communal violence during Durga Puja celebrations in Chandpur’s Hajiganj Upazila. The fresh death toll has been confirmed by Md Harunur Rashid, officer-in-charge of Hajiganj Police Station as quoted by Dhaka Tribune.

The violence broke out after reports started doing rounds on social media saying that the Holy Quran was allegedly being desecrated at a Durga Puja venue on the bank of Nanuar Dighi.

According to Bangladesh Home Minister, the attacks on the Durga Puja pavilion were ‘pre-planned’ as unabated targeted attacks are being carried out against Hindus in the country. The attacks started in Cumilla during Durga Puja and then spreads to other parts of the nations as reports stated violence, arson, and killings in various parts of Bangladesh.

In connection with the violence, nearly 450 people have been arrested for spreading rumours on social media, meanwhile, 71 cases have been filed in different parts of the nation.