Tathagata Projects Self As Bengal CM

How China Will Counter US

Section 144 imposed in Lucknow till November 8- Here’s why 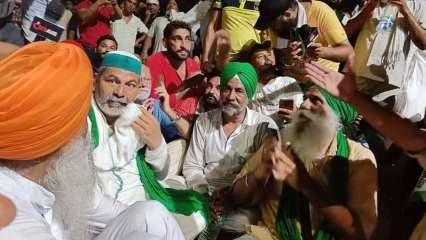 Farmers will continue their sit-in protest around the mini secretariat in Haryana’s Karnal district after talks between farmers and the district administration failed to make headway, Bharatiya Kisan Union leader Rakesh Tikait said on Wednesday.

The farmers are demanding action against officials involved in police lathi-charge in Karnal on August 28. “Our talks with the Karnal district administration lasted for three hours but failed. Officers are not ready to suspend him (SDM Ayush Sinha) and lodge a case against him. The officers are getting directions from Chandigarh. So we have decided to continue our protest here till our demands are met,” Tikait said addressing reporters.

He also said that farmers from Uttar Pradesh, Punjab and other places will join the protest. “Along with our protests in Delhi, this agitation will also continue until our demands are met. Our demand is that the officer should be suspended and the injured and dead farmers should be paid compensation,” the BKU leader said.

Swaraj India chief Yogendra Yadav said, “Haryana government is still not ready to accept the demands of the farmers. They denied lodging a complaint against the police officials which proves that the order to do a lathi-charge on farmers on August 28 was ordered by the Haryana Chief Minister who is backing him”.

On Tuesday, Samyukta Kisan Morcha, which is leading the agitation against three new farm laws, had given a call for ‘gherao’ of the secretariat demanding registration of an FIR against officials who had allegedly ordered a lathi-charge on agitators during their protest against a BJP event in Karnal on August 28. The farmers had three meetings with the district administration yesterday but no fruitful discussion took place, which resulted in farmers continue their sit-in at the mini secretariat.

“Despite various obstacles, we have ‘gheraoed’ the mini secretariat and will continue our protest peacefully till the government accepts our demands. Our fight is with the government not with the police officials,” said Tikait.

The Haryana government on Tuesday evening extended the temporary suspension of mobile internet and SMS service in Karnal district to curb the “spread of inflammatory material and rumours” during the protest.

A Kisan Mahapanchayat was held in Muzzafarnagar on Sunday against three farm laws by the Centre. It declared that they will campaign against the BJP in the upcoming assembly elections. The Mahapanchayat witnessed participation from various political parties.

Farmers have been protesting on the different borders of the national capital since November 26 last year against the three newly enacted farm laws.

Farmer leaders and the Centre have held several rounds of talks but the impasse remains.

Centre hikes DA by 3 per cent for central employees