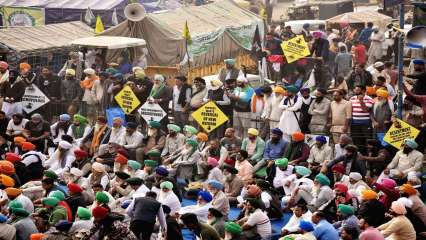 After nearly a year of continuous protests, farmers from different parts of the country gathered in the Muzaffarnagar district of Uttar Pradesh, for the Kisan Mahapanchayat on Sunday, September 5. The gathering was held with regard to the current protests against the three controversial farm laws proposed by the Centre.

The Samyukt Kisan Morcha (SKM) organized the Kisan Mahapanchayat on Sunday, which was held at the Government Inter College ground in Muzaffarnagar. This mega-meeting came months before the crucial Uttar Pradesh elections, scheduled for 2022.

More than 300 farmers from 15 states in India participated in the Kisan Mahapanchayat to display the power in their movement. The farmers also said that if their demands are not met by the Centre, they will continue their protests, and ultimately push for Bharat Bandh.

As per media reports, the farmer leaders said, “They (the Centre) said only a handful of farmers are protesting. Let them see what a handful this is today. Let us raise our voices so it reaches the ears of those sitting in Parliament.”

Further, the leaders said that the people of all castes, religions, states, classes, small traders and all sections of the society are supporting their cause. The farmers have been protesting since August last year and conducted this mahapanchayat to display their strength.

The official statement issued by the SMK said, “The Mahapanchayat today will make the Modi and Yogi governments realise the power of farmers, farm labourers, and supporters of the farm movement. The Muzaffarnagar Mahapanchayat will be the biggest ever in the last nine months.”

The farmers further reiterated that they would be campaigning against the ruling party, BJP, in the upcoming elections in Uttar Pradesh and Uttarakhand, and also continue their protests till the Lok Sabha elections in 2024, if the central government keeps ignoring their demands.

BKU leader Rakesh Tikait, who also attended the Mahapanchayat, said that Prime Minister Narendra Modi and other BJP leaders are “rioters” and that they should be given a beating in the UP elections in 2022. He further talked about the sugarcane prices in Uttar Pradesh, targeting the state government.

“This (Muzaffarnagar) is the sugarcane belt. There was a government that had raised the sugarcane price by Rs 80, while another government had increased it by Rs 50. Is the Adityanath government weaker than these two dispensations? It did not increase the price even by one rupee,” he said.

Several farmer unions from Punjab have also demanded that the state government drop all the charges and cases against the protesters by September 8. The unions further said that protests will be conducted on a larger scale if the charges are not dropped.

Ever since the protests regarding the three farm laws started, the central government has conducted three rounds of talks with the farmer leaders. Those talks led to no conflict resolutions or major breakthroughs in the events.

Taliban claim control over Panjshir, resistance calls for ‘end to the war’ in Afghanistan