Heavy rains cause waterlogging in Delhi-NCR, traffic hit at Azadpur, Dwarka and Gurugram 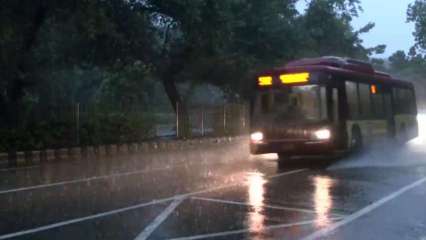 After torrential rains hit the national capital in the early hours of Saturday, various parts of Delhi-NCR were seen to be completely waterlogged resulting in traffic jams across the city.

Traffic is moving at a very slow speed in several parts of Delhi-NCR such as Azadpur, Dwarka, Gurugram, as well as in Noida. The Delhi Traffic Police has also urged commuters to avoid certain routes.

Here’s the traffic advisory that you should follow if you are planning to venture out today:

– Traffic is affected due to an LGV fault on the way from Barfkhana to Tis Hazari, in front of St Stephen’s Hospital.

– While going from Najafgarh to Nangloi, the water of the pond of village Baprola has come on the road, the traffic is running in 1 lane.

– Waterlogging near WHO on Ring Road. Kindly Avoid the Stretch.

– Traffic is heavy due to waterlogging at GGR/PDR.

– Waterlogging on NH 48 near Gurugram/Parade Road Crossing. Vehicles going from Dhaula Kuan to Gurugram may take a right turn on Carriappa marg and take a left turn from Thimmaayya Chowk on Thimmaayya Marg to reach Airport/ Gurgaon.

– The traffic from Badarpur to MB Road has been diverted from the ashram.

– Traffic is moving in 1 lane due to waterlogging while going from Khajuri flyover to Brijpuri.

– Near about T point of road number 210 and 224 near DJB booster pump Dwarka, there is heavy water logging due to overflow of drain and rain.

– Traffic is affected at Dwarka Sec- 20 road no-226 due to waterlogging.