Bad news! Electricity tariffs likely to be hiked as govt… 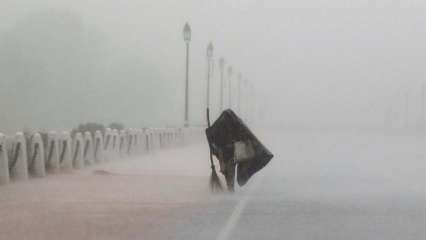 India Meteorological Department has predicted an increase in rainfall over parts of northwest India with fresh spells of heavy rainfall at isolated places over Haryana, Rajasthan, and west Uttar Pradesh from September 16. On Tuesday morning, the depression over the northwest Bay of Bengal intensified into a deep depression and crossed the coast near Chandbali in Bhadrak district, following which the weather office issued alerts for 13 districts.

The system is very likely to move west-northwestwards across north Odisha, north Chhattisgarh, and Madhya Pradesh over the next 48 hours. The department has issued a ‘Red’ warning, predicting heavy to very heavy and extremely heavy rains in Sambalpur, Deogarh, Angul, Sonepur, and Bargarh.

IMD has placed Chattisgarh, Madhya Pradesh, Gujarat and Madhya Maharashtra under an orange alert from Monday, which instructs residents to be prepared for the rough weather conditions. The southerly winds from the Bay of Bengal are all set to bring moderate to heavy rain across Northeast India from Thursday to Saturday.

A deep depression formed over Chhattisgarh on Tuesday. This will move northwestward to east Rajasthan by Thursday and almost stall in Rajasthan through the weekend. With the associated movement of this deep depression, heavy rains are possible along Central, East, North India in the coming days.

As per the Weather Department, the monsoon trough lies south of its normal position. It is very likely to remain in this position for the next 3-4 days. IMD has predicted scattered rainfall over Peninsular India during the next three days.

It’s another rainy day for Delhi-NCR on Wednesday.

IMD forecasts light to moderate rainfall along with the possibility of thundershowers in the evening or night in Delhi.

Relative humidity at 8.30 am was 80% and temperature at the same time was 27.8 degrees Celsius.

Cloudy skies and heavy rainfall are a possibility on Thursday and moderate rainfall is on the forecast for Friday.

On Thursday, heavy to very heavy rainfall is on the forecast over several places including Delhi.

More than 60mm of rainfall in 24 hours was recorded in the city by the India Meteorological Department.

Between Tuesday morning and evening, it recorded around 65mm of rain in Alipore, 105mm in Salt Lake and 130 mm in Dum Dum.

The weather in Kolkata is likely to improve from Wednesday afternoon, the Met Department said.

The intensity of rainfall is likely to reduce from Wednesday in Mumbai.

Over 204.5 mm is classified as extremely heavy rain and over 300 mm as exceptionally heavy rain.

Wednesday onward, all Konkan districts will receive only moderate rain, except Palghar.

In Palghar showers will continue to remain between heavy to very heavy, the Met Department predicted.