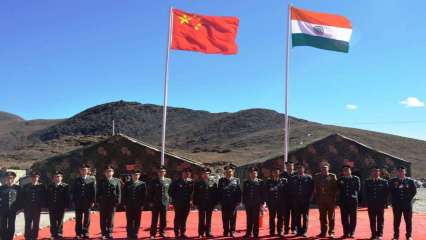 Amid rising tensions, India and China are set to hold the 13th round of talks today to address the military stand-off between the two countries, which is currently underway. According to sources from the Army, the talks are being conducted to cool off some of the tensions on the LAC.

During the 13th round of talks between India and China today, the resolution of friction point at the Hot Springs will be discussed as per reports. The aim of the talks will be to resolve the ongoing stand-off between the countries in the eastern part of Ladakh.

Army chief General M M Naravane, while talking to the media, was quoted saying that the Chinese are “there to stay” as they have been building infrastructure on their side of the LAC. The troops have been facing each other on the Hot Springs ever since the Chinese army crossed the LAC in May 2020.

While tensions have been eased on the north and south banks of the Pangong Tso and Gogra post, the stand-off at Hot Springs still remains. It has also been reported that the Chinese army has also been preventing Indian forces from accessing their usual patrolling points on the Depsang Plains.

There was also a near clash reported between the armed forces of India and China last week when the Indian troops confronted over 150 Chinese soldiers in Tawang in Arunachal Pradesh. Local commanders had stepped in to control the situation before the tensions converted into a state of war.

Reasons behind India staring at a power crisis