SpiceJet ties up with EaseMyTrip for holiday booking…

Inside the coronavirus testing failure

On a Jan. 15 conference call, a leading scientist at the federal Centers for Disease Control and Prevention assured local and state public health officials from across the nation that there would soon be a test to detect a mysterious virus spreading from China. Stephen Lindstrom told them the threat was remote and they may not need the test his team was developing “unless the scope gets much larger than we anticipate,” according to an email summarizing the call.

“We’re in good hands,” a public health official who participated in the call wrote in the email to colleagues.

Three weeks later, early on Feb. 8, one of the first CDC test kits arrived in a Federal Express package at a public health laboratory on the east side of Manhattan. By then, the virus had reached the United States, and the kits represented the government’s best hope for containing it while that was still possible.

For hours, lab technicians struggled to verify that the test worked. Each time, it fell short, producing untrustworthy results.

That night, they called their lab director, Jennifer Rakeman, an assistant commissioner in the New York City health department, to tell her it had failed. “Oh, s—,” she replied. “What are we going to do now?”

In the 21 days that followed, as Trump administration officials continued to rely on the flawed CDC test, many lab scientists eager to aid the faltering effort grew increasingly alarmed and exasperated by the federal government’s actions, according to previously unreported email messages and other documents reviewed by The Washington Post, as well as exclusive interviews with scientists and officials involved.

In their private communications, scientists at academic, hospital and public health labs — one layer removed from federal agency operations — expressed dismay at the failure to move more quickly and frustration at bureaucratic demands that delayed their attempts to develop alternatives to the CDC test.

“We have the skills and resources as a community but we are collectively paralyzed by a bloated bureaucratic/administrative process,” Marc Couturier, medical director at academic laboratory ARUP in Utah, wrote to other microbiologists on Feb. 27 after weeks of mounting frustration.

The administration embraced a new approach behind closed doors that very day, concluding that “a much broader” effort to testing was needed, according to an internal government memo spelling out the plan. Two days later, the administration announced a relaxation of the regulations that scientists said had hindered private laboratories from deploying their own tests.

By then, the virus had spread across the country. In less than a month, it would upend daily life, shuttering the world’s largest economy and killing thousands of Americans.What went wrong with coronavirus testing in the U.S. | The Fact Checker

In a statement to The Post, the CDC said an investigation of the initial problems is ongoing. The test is now in use in every state and is “accurate and reliable,” the agency said.

Stephen Hahn, the commissioner of the Food and Drug Administration, which regulates testing, told The Post the agency is continuously adapting to an “unprecedented global public health crisis.”

“Right now, our efforts are focused on doing everything we can do to fight COVID-19, but we know there will certainly be a time to learn larger lessons from the agency’s response,” he said in a statement, referring to the disease caused by the novel coronavirus.

In an interview Thursday, Brett P. Giroir, a Public Health Service admiral who on March 12 was named the top administration official on the testing effort, acknowledged the government should have moved more decisively to detect and contain the virus.

“There was a clear need for a more aggressive posture,” said Giroir, an assistant secretary at the Department of Health and Human Services, adding that agency leaders named him to the new role because “unprecedented steps needed to take place.”

Asked who was responsible for the delays in the early stages of the crisis, he paused.

“A problem like this is bigger than any single agency,” he said. “Clearly, there needed to be a higher level of leadership and organization.” 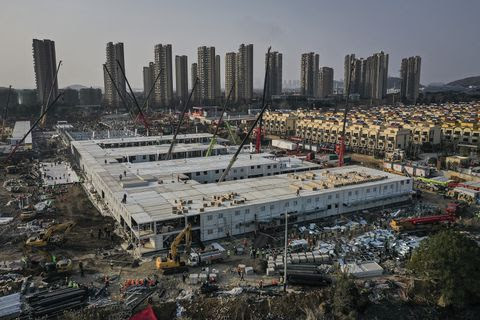 A hospital is constructed in January for coronavirus patients in Wuhan, China. (Getty Images)

The need for a test

The first reports about a strange, possibly unknown virus started leaking out of China in late December. Scientists and researchers in the United States and around the world began paying keen attention to the apparent epicenter of the spread, a sprawling industrial city in central China called Wuhan.

Among those keeping close track were virologists and other specialists at the CDC, the country’s flagship public health agency. Founded in 1946 to fight malaria in Southern states, the CDC is at the vanguard in the fight against infectious diseases throughout the nation. It employs some 22,000 epidemiologists, biologists, behavioral scientists and others. Recent successes include rapid responses to contain the Zika, MERS and Ebola viruses.

In early January, the CDC publicly treated the virus from Wuhan as a distant potential threat, issuing an advisory urging that the “usual precautions” be taken when traveling abroad.

The agency also began laying plans to protect the country. Led by Lindstrom, one team began considering the kinds of tests, technically called assays, that could identify the virus.

Lindstrom is a microbiologist with an impressive track record: He had helped develop a testing method critical to detecting the H1N1 virus in 2009. During a Jan. 7 conference call, he told public health officials that the CDC’s aim was to “plan for the worst, hope for the best,” according to an email exchange among scientists and others. Lindstrom, like several other officials named in this report, did not respond to requests for interviews.

On Jan. 10, CDC scientists received an important break when the Chinese government published the pathogen’s genetic sequence. The sequence, a long string of letters representing the RNA structure of SARS-CoV-2 described a coronavirus never before seen in humans. It also gave scientists a path to create a precise diagnostic test that could detect the virus.

CDC has long led the nation’s efforts to create diagnostic tests when a public health threat emerges. The agency usually distributes the tests to a network of state and county public health labs nationwide, using the results to track and contain new pathogens until large-scale commercial tests come on line.

But state and local public health labs juggle an immense array of responsibilities, including water and food safety, and government studies dating back two decades have found the public health labs often lack the money and resources to keep pace with the demands.

On the Jan. 15 call, Lindstrom told more than a dozen public health officials that the CDC planned to make its test available to all state and county public health labs. He assured them “there will not be pressure for everyone (at least from CDC) to implement unless the scope gets much larger than we anticipate right now,” according to the email summary written by Kelly Wroblewski, director of infectious disease programs at the Association of Public Health Laboratories.

CDC scientists were not the only ones interested in creating a test. Commercial laboratories began to mobilize, and scientists at major hospitals and universities sprang into action to develop tests of their own.

One of them was Alex Greninger, 38, an assistant director of the University of Washington’s clinical virology lab. For Greninger, the chance to create a diagnostic test for a novel coronavirus was a rare opportunity.

Researchers at the University of Nebraska, Stanford University and elsewhere also began taking their first steps toward inventing tests for the virus to use in their own labs. These academic labs didn’t have the capacity to process the millions of tests that would be needed in the event of a pandemic, a scale that is achievable only by commercial labs, but their limited testing capabilities might have helped efforts to detect and slow the virus in its early stages.

On Jan. 16, the day Greninger started buying supplies for his test, a 35-year-old man who had recently visited Wuhan became ill with flu-like symptoms after returning to the Seattle area, according to a CDC incident report. The man went to his doctor, who swabbed his nose and sent the sample to the CDC, according to the report.

Four days later, using its newly developed test, the CDC confirmed that the man was the first person in the United States known to be infected with the novel coronavirus.

In a CNBC interview two days after that, President Trump downplayed the threat to Americans.

“We have it totally under control,” he said.

Centre assured to give due respect to Naga flag, say NNPGs