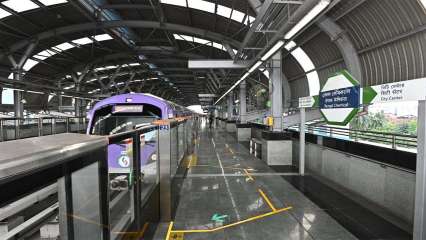 Keeping in mind the rush hours during the upcoming Durga Puja, the Kolkata metro has increased its timings by one and half hours from October 12. In addition, it will also increase the frequency of metros during the Durga Puja days with adequate security arrangements.

As per Kolkata Metro, from Saptami to midnight on Nabami the timing of metro operations will be from 10 am till 11 pm. “For the three main days of Puja, we have decided that we’ll increase the timings of the last train by 1:30 hrs. Thus, the last train will leave at 11:00 pm,” said Manoj Joshi, Chairman, Kolkata Metro Rail Corporation.

Residents of Kolkata are appreciating the decision taken by the authorities because they usually get home late after puja pandal hopping.

“For crowd management, we have increased the frequency of trains in the evening. There will be metro trains running every six minutes. Railway Police Force & special station staff will manage crowd… There will be no lapse in security arrangements Special control room and monitoring room has been set up at Metro Bhawan where our officers will closely monitor,” Joshi added.

In view of the festive season, metro services will ply till 11 pm. For crowd management, more frequency of trains in the evening with one metro running every 6 minutes. Secondly, RPF & station staff will manage crowd: Manoj Joshi, Chairman, Kolkata Metro Rail Corporation (05.10) pic.twitter.com/hY1T9JL94I

Meanwhile, the runway of the Pune airport will remain shut for 14 days from October 16 to 30 for re-carpeting by the Indian Air Force. This means no flight will be able to take off or land at the airport during this period. “Runway will remain shut from 8 pm on October 15. The flights will resume from 8 am on October 30,” an airport official said.

However, airlines have urged the government to reconsider shutting down the airport for 15 days in the middle of the peak festive season – from Dussehra to Diwali and asked them to review the order.