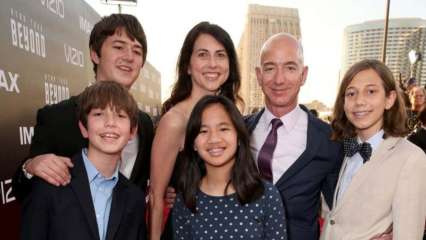 Amazon founder Jeff Bezos is one of the richest men in the world. Earlier in 2021, Bezos had also announced that he will step down as the company’s CEO in a statement released by Amazon.

The statement clarified that Bezos will step down from the CEO’s position in the third quarter of 2021 and become executive chairman of the company.

57-year-old Bezos will be replaced by Andy Jassy, presently the head of Amazon’s cloud computing division. Bezos has a total net worth of $197.8 billion.

A Princeton graduate, Jeff Bezos first started Amazon from his garage in 1993. Bezos met his ex-wife MacKenzie Scott (Tuttle) in 1992 before he started working on Amazon. The couple got married in 1993 and moved to Seattle from where Amazon was started.

In 2019, unfortunately, Bezos and MacKenzie announced their divorce after a lengthy period of separation. Bezos is currently in a relationship with news anchor Lauren Sánchez.

All about Jeff Bezos’ children

Jeff Bezos and MacKenzie Scott are parents to four children – three sons and one daughter. The couple had adopted their daughter from China. Bezos likes to maintain the privacy of his children, however, reports state that the name of his 20-year-old son is Preston Bezos.

Preston is the eldest son of the now estranged couple. He also, like Bezos, joined Princeton University. Reports state that Preston loves traveling and Mexican food.

Bezos now shares 50/50 custody of their children with MacKenzie. In an interview, when asked what advice he would give to his children, Bezos had said, “Be proud of your choices, not your talents. You’ve gotta figure out what you love. And it’s going to bring you great joy.”

Bezos’ four children are all set to inherit his colossal fortune in the future. After his divorce from his ex-wife, while Jeff retained 75% of Amazon’s stocks MacKenzie received 25% of the shares. Bezos also gave 4% of his company to MacKenzie.