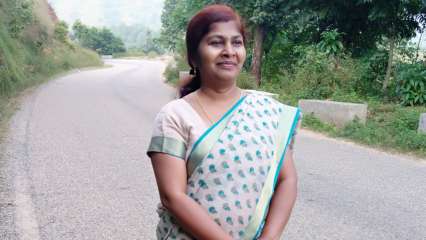 Ahead of the Assembly elections in 2022, the Chief Minister of Uttar Pradesh expanded his Cabinet on Sunday (September 26) with seven new faces on board. Ex- Congress leader, Jitin Prasada being one of them who was also a close aide of Rahul Gandhi.

Another addition to the Cabinet has been Dr Sangeeta Balwant. Despite not being a big face in BJP, she is a well-known political face in Purvanchal region. Adding her to the Cabinet also helps regarding the respresentation of the Ghazipur district.

Dr Sangeeta Balwant is the daughter of a retired postman Ramsurat Bind, a resident of Badsara village of Karanda block. Coming from a very simple family, MLA Sangeeta Balwant belongs to the Mallah caste. She was born in Ghazipur city and was involved in politics since her student life. She completed her Intermediate from Lord’s Convent Girls’ Inter College in Firozabad and got herself admitted to a postgraduate college.

In 1997, she contested the student union election from a PG College, where she was elected as the Vice-President, he had received 2,272 votes. Once that happened, she became active in politics and in 2005, she contested for the distrcit panchayat election from Sadar III and won by a recording breaking 6,600 votes.

In 2017, Dr Sangeeta was elected MLA on a BJP ticket from Ghazipur Sadar by securing 92,090 votes. Later, she got an opportunity to represent the state in the National Women’s Welfare, Delhi. She was appointed as the Chairperson of the Women’s Commission Committee.

In 2020, she was honoured with the ‘Adarsh ​​Yuva Vidhayak Samman’ at Vigyan Bhawan, Delhi and she is the only MLA in the state to receive this honour this year.

She had contested the Uttar Pradesh Legislative Assembly election held in 2017 and was elected from the Ghazipur Sadar assembly constituency. Even though she was initially involved in political activities of the Bahujan Samaj Party (BSP). However, with the influence of BJP leader Manoj Sinha, she joined Bhartiya Janata Party.

Two terrorists killed in Kashmir encounter after refusing to surrender