GST Council meeting likely to be stormy as three contentious…

Mumbai the world’s most stressful city to drive in, Delhi fourth and Bengaluru eleventh, survey reveals 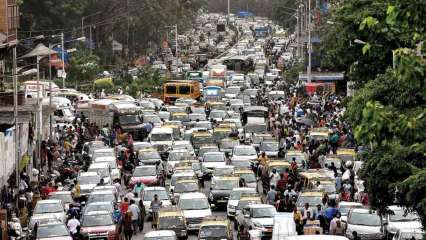 A UK-based automobile company’s recent survey suggests that India’s financial capital Mumbai is the world’s most stressful city to drive in. The car-sharing company Hiyacar surveyed 36 biggest cities of the world and ranked them based on a range of road safety factors.

Maharashtra’s capital Mumbai came out at the top in the world’s most stressful cities to drive a vehicle. The survey observed different factors to draw its conclusion, including cars per capita, total vehicles in a city, how big an issue are traffic jams in a city, the quality of city roads, situation of public transport, number of road accidents in a year and how crowded were the cities.

Based on these factors, the cities were rated between 1 to 10 on the amount of stress levels. Mumbai received a score of 7.4 in this survey, which is more than any of the 35 other cities rated. Hence, the survey names Mumbai as the most stressful city to drive in.

Mumbai accommodates 510 cars and 1 lakh people per square kilometer. It has the most crowded streets and 8 types of public transports. The city’s dense population is the biggest reasons behind the Mumbai witnessing most accidents.

French capital Paris came second in the survey with a score of 6.4. The least stressful city among the 36 surveyed was Lima, the capital of South American country Peru, with a score of 2.1.

Here’s a glimpse of the 10 most and 5 least stressful cities globally to drive in:

Top 10 most stressful cities to drive in:

5 least stressful cities to drive in: