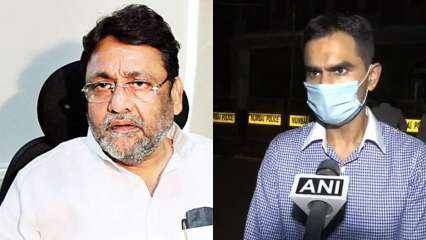 The political row around the Mumbai cruise drugs case brings another argument to light, as NCB zonal director Sameer Wankhede has finally broken his silence and spoken out against NCP leader Nawab Malik and his allegations on the former’s sister-in-law.

Sameer Wankhede, who has been the brunt of the allegations put forth by Nawab Malik in the drugs case, has hit back at the Maharashtra minister, criticizing his allegations against his sister-in-law and his move to “name a woman” in a public statement.

Sameer Wankhede, who is Narcotics Control Bureau’s zonal head in Mumbai, said, “Good work, dear friend, by circulating the name of a woman. In fact, when we issue a press release, we don’t share the names of women to protect their dignity.”

Alleging Redkar’s linking to a drug case, Nawab Malik tweeted, “Sameer Dawood Wankhede, is your sister-in-law Harshada Dinanath Redkar involved in the drug business? You must answer because her case is pending before the Pune court.”

Dismissing the statements made by Malik, Wankhede said that he married Kranti Redkar in 2017 and was not even in service and a part of the NCB when the case happened in January 2008. Defending himself against Malik’s allegations, Wankhede had also said earlier, “Why can’t he go to court?”

Nawab Malik has also recently alleged that the Mumbai cruise drugs case, which involves Bollywood superstar Shah Rukh Khan’s son Aryan Khan, is nothing but an extortion and kidnapping case.

CCP : China ‘standing up’ under Xi

What is the secret to Shoaib Malik’s marathon career?