Appeal To Japan To End Assistance To Cambodian Police 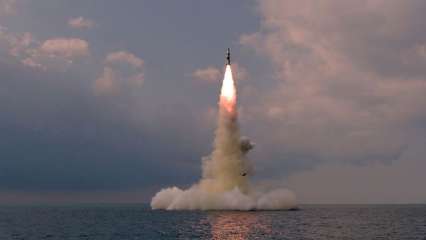 According to the report, North Korean leader Kim Jong-un did not inspect the missile’s test firing.

North Korea fired a short-range missile, which reports said is an SLBM, on Tuesday from the vicinity of Sinpo, where its main submarine shipyard is located, South Korea’s military said.

Releasing pictures of the missile, North Korea’s news agency said, it has new “controlling and homing” technology that allowed it to move laterally. The missile is also capable of “gliding and jumping movement”. Reportedly, the missile was launched from a submarined, which had launched a missile in 2016 for a test.

The missile landed in the Sea of Japan, the East Sea, as it travelled about 450km (280 miles) at a maximum height of 60km.

Death toll rises to 42 as rains lash Uttarakhand, Nainital cut off from plains due to landslides

Rainfall activity to now shift towards UP and THESE states after battering Uttarakhand, says IMD