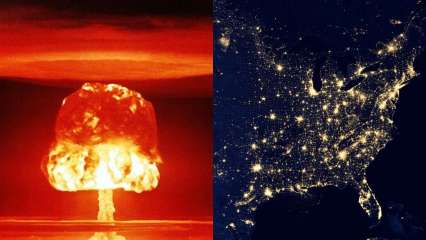 Researchers in China made a recommendation to their government in July urging it to improve the country’s capability to defend against a high-altitude electromagnetic pulse (EMP) strike.

Military and non-proliferation analysts fear nuclear-armed countries’ increasing willingness to use nuclear weapons in a first-strike EMP attack that, while avoiding direct casualties, could be disastrous to electrical grids and electronic devices.

The immense potential of an EMP created by a nuclear weapon explosion at a high altitude has already been acknowledged. Currently, government and commercial evaluations of EMP strikes and their impacts on the electrical system are based on basic solid Earth models that assume no change in depth or composition.

However, it turns out that the three-dimensional distribution of rocks beneath our feet substantially influences the real consequences of an EMP in outer space on the power system. High-altitude EMPs, according to geophysicist Jeffery J. Love’s research, produce three successive waveforms with differing impacts on electrical systems that are E1, E2, and E3.

The high-frequency E1 pulse damages consumer electronics and receives the greatest attention; E2 operates similarly to lightning and, interestingly at the same time, the electrical systems are resistant to its effects.

The E3 waveform has the smallest amplitude of the EMP signal, but it is the longest-lasting, with periods ranging from 0.1 to several hundred seconds. It has the ability to cause serious damage to the electricity network through its interactions with the earth’s Surface.

Researchers deployed sensors on the ground in a new study to measure the natural change in the Earth’s magnetic field over several weeks. At the same places, they utilised voltmeters to measure the time-varying electric field. Surface impedance, an electromagnetic property that is dependent on rock conductivity, is estimated using these two measurement techniques.

Overall, the study discovered that EMP dangers in complicated geological settings had not been effectively identified. It is also recommended that special attention be made to areas where magnetic storm threats are known to be high.

Not just Ola, Simple Energy will also launch an electric scooter on August 15