A major conspiracy of Pakistan to defame India all over the world has been exposed. To spread lies on Kashmir against India, Pakistan has engaged its high commissions and embassies spread across the globe. Documents available with Zee Media have revealed that on October 27, Pakistan has planned to organize demonstrations and seminars against India in many countries of Europe including America.

Notably, in order to make these programs against India successful, Pakistan had recently called a meeting of the Kashmir Cell, which included officials of Pakistan’s Foreign Ministry including officials of Pakistan’s world-disgraced intelligence agency ISI. In this meeting, many strategies were discussed to make the program a success. Let us tell you that Pakistan celebrates October 27 every year as ‘Kashmir Black Day’.

Pakistan has also sent a list of events to be held on October 27 through fax messages to all its embassies. Along with this, a special fund has also been sanctioned for this. All these countries have been asked to organize webinars  on Kashmir, in which cases of fake human rights abuses against Indian security forces will be highlighted. 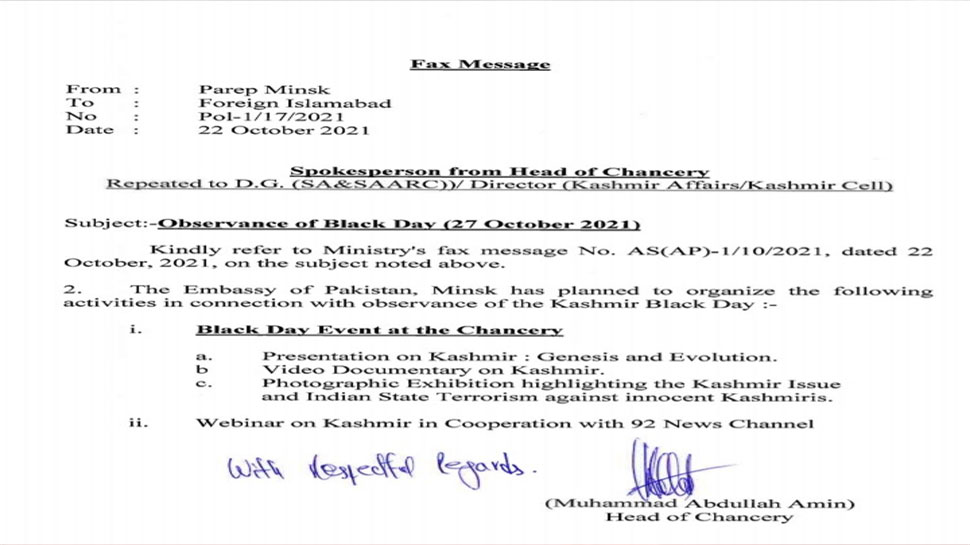 The embassies have also been asked to make plans for getting better coverage of the protests in the media of those countries. Funds have also been sent from Islamabad to all Pakistan embassies to make these demonstrations successful.

Along with this, it has been decided to use social media platforms like Twitter, Facebook and WhatsApp as well. Pakistan has also engaged its social media army to use the Pakistani ISI hashtag on Twitter regarding Kashmir. On this occasion, Pakistan has invited many Kashmiri separatists to these programs to be held around the world, so that the world can be told that this is the voice of common Kashmiris.

On February 1 this year, a similar fax was sent by the Pakistani Foreign Ministry to its Consulate General Office located in New York, US, to make Kashmir Solidarity Day a success with the help of the Pakistani American community. Along with this, all taxis and trucks in New York were asked to conduct advertisement campaigns against India as well as webinars on Kashmir Solidarity Day.

Sajan Shah, an inspirational leader on his way to build a strong-willed society

SC to pronounce order on probe pleas on Wednesday

India Wants Both Russia, US Against China