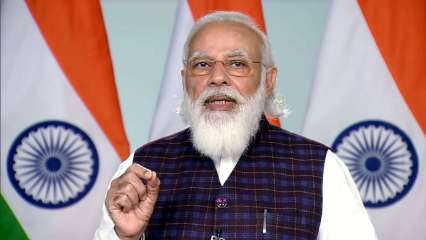 Prime Minister Narendra Modi has congratulated Charanjit Singh Channi on being appointed as the new Chief Minister of Punjab today. PM Modi has further stated that they will continue to work together for the betterment of the state in the future.

In his tweet, PM Modi wrote, “Congratulations to Charanjit Singh Channi Ji on being sworn-in as Punjab’s CM. Will continue to work with the Punjab government for the betterment of the people of Punjab.”

Charanjit Singh Channi has made history today by being the first-ever Dalit leader to be appointed the Chief Minister of Punjab. The oath-taking ceremony of Channi commenced today at 11 am and was attended by several notable Congress leaders, including Rahul Gandhi.

Congratulations to Shri Charanjit Singh Channi Ji on being sworn-in as Punjab’s Chief Minister. Will continue to work with the Punjab government for the betterment of the people of Punjab.

Apart from the swearing-in of Charanjit Singh Channi as the Punjab CM, the Deputy CMs of the state were also sworn in today. The oath-taking ceremony of the leaders in Punjab was administered by Punjab Governor Banwarilal Purohit.

The oath-taking ceremony was a small affair, as per media reports, with just about 40 attendees in total. The people who attended the ceremony included Congress leader Rahul Gandhi, Punjab Pradesh Congress Committee president Navjot Singh Sidhu, and Sukhjinder Singh Randhawa.

Channi was appointed the CM of Punjab by the Congress high commission just two days after Captain Amarinder Singh had stepped down from the post. This change in leadership in Punjab has occurred just a few months before the Punjab assembly elections in 2022.

Captain Amarinder Singh stepped down from the post of Punjab CM on September 18 ahead of the meeting of party legislators in the faction-ridden state unit as the party high command decided to effect a change of guard in the border state ahead of assembly polls early next year.