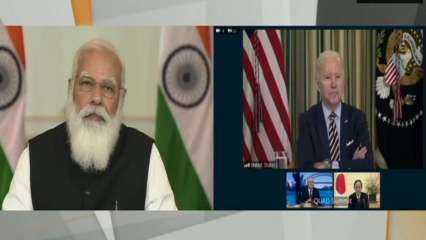 Prime Minister Narendra Modi will be attending the first first-ever in-person Quad summit at the White House on September 24. Besides, PM Modi will also address the UN General Assembly in New York on September 25. the will be Modi’s first visit to the United States since President Joe Biden assumed office early this year.

The US announced on Monday that the first-ever in-person Quad Summit would be hosted by United States President Joe Biden at the White House on September 24. Other than Prime Minister Modi, it will also be attended by Prime Minister Scott Morrison of Australia and Japanese premier Yoshihide Suga.

Earlier in March, President Biden hosted the first-ever summit of the Quad leaders in the virtual format.

“Hosting the leaders of the Quad demonstrates the Biden-Harris Administration’s priority of engaging in the Indo-Pacific, including through new multilateral configurations to meet the challenges of the 21st century,” White House said.

The purpose of the Summit is to deepen ties and increase cooperation in areas such as combatting COVID-19, addressing the climate crisis, partnering on emerging technologies and cyberspace, and promoting a free and open Indo-Pacific, the White House said.

The March virtual Summit vowed to strive for an Indo-Pacific region that is free, open, inclusive, anchored by democratic values, and unconstrained by coercion, sending a subtle message to China.

This will also be Prime Minister Narendra Modi’s first in-person meeting with US President Joe Biden. The two have met virtually on at least three occasions – the Quad summit in March, the climate change summit in April, and the G-7 summit in June this year.

Will pass an interim order in next few days: SC on Pegasus case