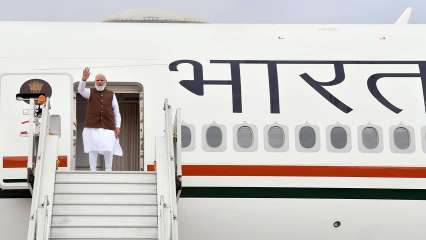 In a break from over a decade long practice, an Indian Prime Minister is not making a stopover in Frankfurt en-route to the US. Prime Minister Narendra Modi’s plane–Air India One– is not making a stopover in Frankfurt, as has been the case in the past, as he reaches the US for the Quad summit in Washington and United Nations General Assembly address in New York.

The key reason for the development is the new capabilities of the Air India One. Air India one, the VVIP aircrafts used for ferrying President, Vice President and PMs arrived from the US last year in October. The state-of-the-art aircraft were brought around the cost of over Rs 4,500 crore. The aircraft has the capacity to fly long distances without refuelling stopover, which was seen in the past.

His plane left Delhi on Wednesday and used Pakistani airspace. Earlier Pakistani PM Khan used airspace over the Indian exclusive economic zone when he was on a visit to Sri Lanka.

This is the 2nd time the new Air India one is ferrying PM Modi. The last visit was to Bangladesh in March of this year, which was a visit of a short duration. In the past, regularly, Indian PMs’ planes have made stopovers in Frankfurt, Germany. PM Modi’s last visit to the US was in 2019, remembered majorly because of the mega diaspora event–Howdy Modi in Houston. During that visit as well, PM Modi’s plane had made a stopover in Frankfurt.

A brief stopover at Frankfurt. pic.twitter.com/0FXquqfS89

Prime Minister Manmohan Singh’s plane had also made regular stopovers in Frankfurt, which provided a much-needed break from the long journey. It takes over 12 hours to reach the United States.

Freight train with 1,051 MT of urea arrives in North Lakhimpur