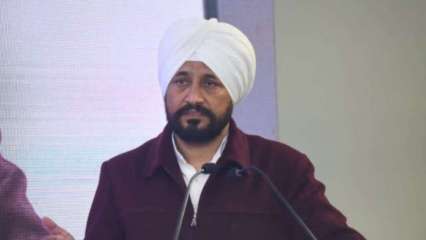 On Saturday, Punjab CM Charanjit Singh Channi opened up about the 2015 sacrilege, addressing a gathering after laying the foundation stone of Bela-Paniyali road and bridge over the river Sutlej, and said that all those who were involved in the sacrilege incidents would be exposed.

CM Channi said, “I can be poor but I am not weak. I will solve Punjab’s issues that people in every house in the state will say “Ghar ghar de vich chali gal, Channi karda masle (issues) hal (solve)”. I will solve all issues including sacrilege, drugs. All those involved in the sacrilege incidents would be unmasked.”

Raising the issue of drugs in Punjab, CM Channi said, “All those guilty who pushed our youth into drugs would not be spared at any cost. With the opening of the report against the drug mafia all the big sharks involved in drug trafficking would be exposed.”

Reiterating his government’s firm commitment to stamp out corruption from the life of the public, the CM said that every decision is taken for the overall development and prosperity of the state, besides the welfare of its people with absolute sincerity and determination.

Lambasting the Shiromani Akali Dal (SAD) leaders, CM Channi said that the SAD government had ignored the interests of the state and gave priority only to its vested interests. He also accused the SAD to be in sync with the BJP for indulging in an ugly game of politics, thereby, fanning hatred by playing the card of caste and religion.

CM Channi further attacked the Aam Aadmi Party (AAP) and said that several self-styled “aam adami” have surfaced nowadays just for politicking, and are not even remotely connected with the basic problems and needs of the people.”

“Our legal team managed to get permission to interrogate Gurmeet Ram Rahim in sacrilege case. Our lawyers are also fighting the case of drugs in the court and hopefully, on November 18, the sealed reports will be opened,” he said.