Sukarno’s Daughter To Convert To Hinduism

Bengaluru building razed after it tilts due to heavy rains 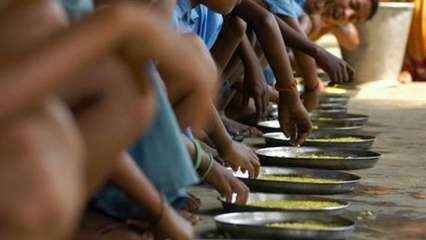 Expressing ‘shock’ over the Global Hunger Report 2021 that lowered India’s position, the Centre on Friday said that the publishing agencies have not done ‘due diligence’.

In a statement, the Ministry of Women and Child Development said that the report has lowered India’s rank on the basis of FAO estimate on the proportion of the undernourished population, which is “found to be devoid of ground reality and facts and suffers from serious methodological issues”.

Notably, India’s rank has dropped to the 101st among 116 countries. India was ranked 94th out of 107 countries in 2020. After the release of this new list, India is now behind even its neighbouring countries Pakistan, Bangladesh and Nepal.

“It is shocking to find that the Global Hunger Report 2021 has lowered the rank of India on the basis of FAO estimate on the proportion of the undernourished population, which is found to be devoid of ground reality and facts and suffers from serious methodological issues. The publishing agencies of the Global Hunger Report, Concern Worldwide and Welt Hunger Hilfe, have not done their due diligence before releasing the report,” the ministry said in the statement.

“The methodology used by FAO is unscientific. They have based their assessment on the results of a ‘four question’ opinion poll, which was conducted telephonically by Gallup. The scientific measurement of undernourishment would require measurement of weight and height, whereas the methodology involved here is based on Gallup poll based on pure telephonic estimate of the population,” it added.

“The report completely disregards the Government’s massive effort to ensure food security of the entire population during the covid period, verifiable data on which are available. The opinion poll does not have a single question on whether the respondent received any food support from the Government or other sources. The representativeness of even this opinion poll is doubtful for India and other countries,” the ministry said.

The ministry said in addition to food grains, one kg pulses have been provided per household per month for the period April to November 2020 free of cost to all beneficiaries under NFSA covering 19.4 crore (194 million) households.

It said that under ANBS, Government made an allocation of about 8 lakh (800 thousand) metric tons of additional free of cost food grains covering all the states and UTs for migrants/stranded migrants who were neither covered under NFSA nor state scheme PDS cards, @ 5 kg per person per month free of cost for a period of two months – May and June 2020. In addition to food grains, about 0.27 lakh (27 thousand) metric tons ‘whole chana’ was allocated under ANBS for this period.

The ministry also listed other steps taken by the government to provide relief to people during COVID-19 including a hike in MNREGA wages, front-loading payment of instalments, increase in the limit of collateral-free lending and measures to prevent disruption in the employment of the wage-earners below Rs 15,000 per month in organized sector businesses having less than 100 workers.