Cow Protection Act is a conspiracy to harass the poor, says… 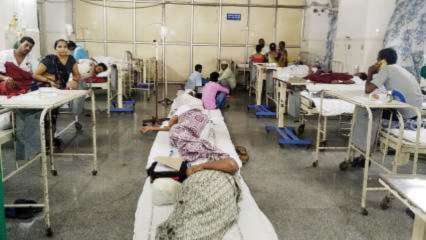 The viral fever outbreak had earlier taken Uttar Pradesh and Delhi NCR in its grasp, with multiple cases reported in each district. Now, the number of viral fever cases is increasing day by day in Bihar, with hospital beds and supplies running out due to sudden demand.

It has been reported that the viral fever outbreak in Bihar has worsened significantly as many patients, most of them children, have been put on oxygen support to fight the illness. As per doctors,  children are being admitted with infections in the lungs and bronchitis.

As per media reports, Dr. Lokesh Tiwari, the pediatrician in Patna AIIMS said, “The children are infected with an unknown virus that causes infection in the lungs. The children are also suffering from bronchitis as well. Hence, we have put the majority of the children on oxygen supports.”

Several districts in Bihar are facing a shortage of hospital beds, as many medical facilities are not equipped to deal with such a growing number of patients in the pediatric wards. As per reports, nearly 80 percent of the NICU and PICU wards in districts are already filled with viral fever patients.

Most of the children who are being admitted with viral fever symptoms are facing infections in their lungs and bronchitis, along with other symptoms. In the Sri Krishna Medical College and Hospital (SKMCH) Muzaffarpur, there are reportedly 102 beds in the PICU ward, but 107 children have been admitted to the hospital, with around 80 percent of them on oxygen, as per reports.

Districts in Bihar such as Saran, Gopalganj, Siwan West, and Champaran are currently seeing a spike in viral fever cases across their jurisdiction. As per reports, over 400 cases of children being down with viral fever have been reported in these districts only.

Purpose and slogans to be shared with ministry