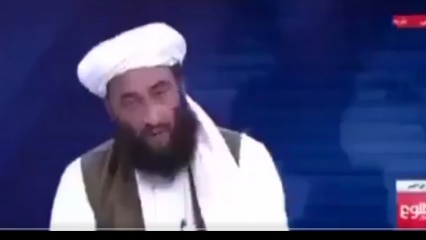 After the Taliban assumed control of Afghanistan, many have come forward raising concerns about the safety and treatment of women after they form their government. Recently, the group announced the formation of their government and an all-male cabinet of ministers.

The Taliban was instantly faced with criticism and questions regarding their non-inclusive government, and recently a spokesperson decided to address these concerns. In a TV interview, Taliban spokesperson Sayed Zekrullah Hashimi said that women cannot be ministers in the country.

He further said that women should not be a part of the cabinet but they should give birth to more Afghanis. The spokesperson further added that one cannot put “something on her neck that she can’t carry”, referencing the burden of becoming a minister.

The clip of the interview was uploaded by a Twitter user. According to the user, the interview was aired on an Afghani news channel TOLO News. As per the translation of the clip, the spokesperson is saying, “A woman can’t be a minister, it is like you put something on her neck that she can’t carry. It is not necessary for a woman to be in the cabinet, they should give birth & women protesters can’t represent all women in Afghanistan.”

A Taliban spokesman on @TOLOnews: “A woman can’t be a minister, it is like you put something on her neck that she can’t carry. It is not necessary for a woman to be in the cabinet, they should give birth & women protesters can’t represent all women in AFG.” Video with subtitles pic.twitter.com/CFe4MokOk0

This statement has been issued with regard to the current situation in Afghanistan, where women have come out on the streets to protest against the formation of the government and the involvement of Pakistan with the Taliban. It was also reported a few days back that shots were fired by the Taliban to disperse the crowd of protestors.

Recently, the education minister of Afghanistan, newly appointed by the Taliban, said that there is no need for PhD and master’s degree in the country as the mullahs don’t have them, and they are “the greatest of all.” The female and male students in Afghani schools have also been asked to sit separately with a curtain being used as a partition, as per media reports.

Man enters hospital’s female ward in salwar-kurta and burqa, find out what happened next