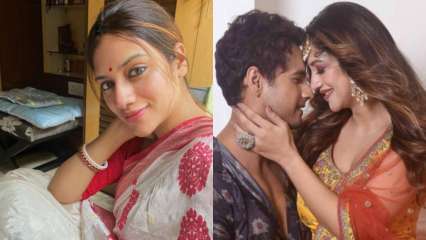 Trinamool Congress (TMC) MP Nusrat Jahan and actor and BJP politician Yash Dasgupta have been grabbing headlines ever since they welcomed their first child Yishaan. Now amid the wedding rumours, Nusrat dropped another hint about her marital status on the occasion of Vijayadashmi.

On Friday, Nusrat took to her Instagram account and shared a photo, wishing all her followers and fans, dressed in a traditional red saree and Shakha Pola bangles.

Nusrat Jahan captioned the photo saying, “Shubho Bijoya’r Priti Subhechcha O Abhinandan.” Though the politician and actress looked stunning in her photo, what caught netizens were the Shakha Pola bangles that she wore in the picture.

Notably, the Shakha Pola (red and white) bangles are worn by married Bengali women. After seeing Nusrat wearing the bangles, fans can’t help but wonder if the actor/politician has secretly gotten married to Yash Dasgupta.

Check out the photo here.

Last week, Nusrat had sent her fans into a frenzy as she sparked speculation that she and Yash have secretly gotten married. The rumours started when Nusrat shared photos from his birthday celebrations and his cake which had the words ‘husband’ and ‘dad’ written on it.

Earlier, speaking about Nusrat’s pregnancy, Yash had said, “I didn’t flinch when she told me. I just asked her if she wanted to go ahead with it. It’s not my body — it’s hers. She needed to decide. I told her I’d never leave her side irrespective of her decision. I wanted to have the baby but couldn’t have forced my decision on her. She even told me that if you want nothing to do with the baby, it’s okay, I’ll keep the baby.”

For the unversed, Nusrat and Yash welcomed Yishaan in August at the Bhagirathi Neotia Hospital in Kolkata.