CPI-M rattled by peace and prosperity in Tripura: CM Biplab…

‘Real-life tarzan’ who spent 41 years in the… 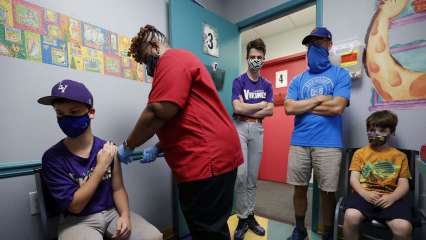 Vaccines for children in the age group of 12-15 years may not be available anytime soon in the United Kingdom. The UK’s vaccine advisory body has refused to give the green light to vaccinating healthy children aged 12-15 years, arguing the benefits were ‘too small’.

The Joint Committee on Vaccination and Immunisation (JCVI), a panel of experts that advises ministers, has been weighing the issue after numerous other countries began giving the jabs to young teens. The JCVI’s argument is that the children are already at low risk from the virus so jabs would offer only a marginal benefit.

The decision not to recommend the vaccine to all healthy children was based on concern over an extremely rare side effect of the Pfizer and Moderna vaccines which causes heart inflammation and can lead to palpitations and chest pain, a leading international media website reported.

On the advice of the JCVI, Britain’s four chief medical officers in England, Scotland, Wales and Northern Ireland will now provide further input ahead of a final government decision. JCVI wants them to consider the ‘wider societal impacts, including educational benefits’ of whether to roll out vaccines to younger teens. Following the summer break schools have reopened across Britain.

The United States announced in May that younger teens would be vaccinated, and many European Union countries including France have already begun jabbing that age group. Italy, Israel and Ireland are also offering the vaccine to all children in this age group.

ED notice to Flipkart: Authorities should be quicker to deal with wrongdoing and violations