PM Narendra Modi to celebrate Diwali with jawans in Rajouri 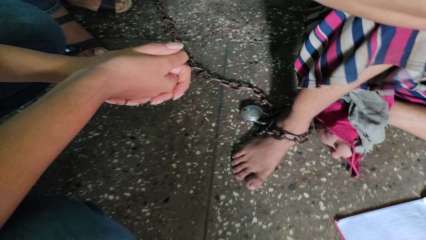 After an incident of a boy been tied up in chains in a madrasa came to light, the Aligarh police on Monday arrested the madrasa owner and the boy’s father in this matter. The father who works as a labourer confessed that on his behest the boy was kept in chains as he used to run away from the madrasa.

Both the madrasa owner and the boy’s father were produced before a local court on Tuesday which sent them to judicial custody. The arrests took place after a video clip went viral on social media purportedly showing a boy chained to his feet, police said on Monday.

Police investigated the video clip and found it to be of a madrasa located in the Sasanigate area of Aligarh. They then raided the place and found the 13-year-old boy chained inside a room, the police said. Police then rescued the boy from the madrasa. A case was registered on the charge of illegal detention. Police also invoked multiple sections of the Juvenile Justice Act against the accused.

How the story unfolded

The madrasa owner told police that the 13-year-old boy had been staying there for about two years.

He twice ran away from the madrasa over the last one month, prompting his father to want him tied to a chain.

The madrasa owner told the police that the victim boy’s father had tied him to a chain at the madrasa.

The police got the child shifted to a government home at the direction of the Child Welfare Committee in Aligarh.

Police took the madrasa owner into custody and also summoned the boy’s father to the police station.

After questioning him, the police also took the boy’s father into custody.

Afghanistan’s Financial System About To Collapse