Why New York City rules are not applicable on UN building 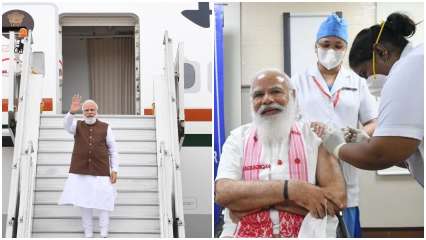 India is still waiting for the World Health Organisation (WHO) to recognise the indigenously manufactured COVID-19 vaccine, Covaxin. Hyderabad-based Bharat Biotech’s Covaxin has also not got approval for emergency use in the United States by the country’s top public health regulator – the Food and Drug Administration (FDA).

This means an Indian vaccinated with Covaxin cannot take a flight to another country and will be treated as unvaccinated. However, there is a twist to the tale. Indian Prime Minister Narendra Modi who took both the jabs of Covaxin is on a three-day visit to the United States where he will address the UN General Assembly.

This raises eyebrows back home as to how the US could allow the Indian Prime Minister on its soil who has been vaccinated with unapproved Covaxin. TV producer of popular shows like ‘Indian Idol’ and ‘MTV Roadies’, Nikhil Alva was quick to respond. Taking to Twitter he wrote, “I am perplexed to hear that PM Modi is off to the USA that doesn’t recognise Covaxin.”

“Like our PM, I too got jabbed with our Atamnirbhar COVAXIN. Now other than Iran and Nepal and a handful more, I can’t travel anywhere in the world. Which is why I’m perplexed to hear that our PM is off to the USA, that doesn’t recognise COVAXIN. So which vaccine did he really take?”

Like our PM, I too got jabbed with our Atamnirbhar COVAXIN. Now other than Iran & Nepal and a handful more, I can’t travel anywhere in the world. Which is why I’m perplexed to hear that our PM is off to the USA, that doesn’t recognise COVAXIN. So which vaccine did he really take? pic.twitter.com/6Y1JpRuraR

Congress and other opposition leaders also took the opportunity and were not behind to raise questions. Congress party’s National Co-coordinator Social Media, Vinay Kumar Dokania wrote, “How is PM Modi allowed in the USA when he has taken the Covaxin vaccine jab which the USA doesn’t recognize?”

United Nations was established on October 24, 1945. As per United Nations General Assembly (UNGA) charter, all members have equal rights.

UN invites countries to participate in UNGA, so technically the US cannot deny any head of state to visit New York where the headquarters are located.

The vaccine rules of the US cannot technically be applied to the New York-based United Nations building where PM Narendra Modi will put up.

Brazil President Jair Bolsonaro has not taken any vaccine till now but still, he will be attending the UNGA meet to be held in New York City.

US is bound by the UNGA charter and so it has to relax its vaccine norms for the head of state and representatives. Thus PM Modi will meet Potus in Washington.