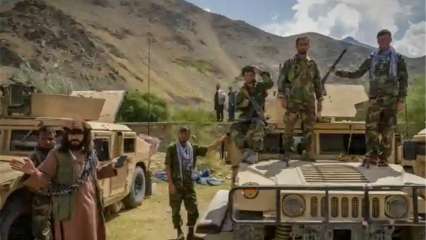 Two months into the Taliban rule in Afghanistan, worries are mounting over the situation of minorities in the country as famous Karte Parwan Gurudwara in Kabul saw vandalization on Tuesday. According to the Sikh community at the Gurudwara, the Taliban entered the holy place and had broken the CCTV cameras.

This is the first such development since the Taliban takeover of capital Kabul. No reaction has come from the Taliban’s spokespersons, who are normally quite media-savvy and quick to react on social media. Puneet Singh Chandhok, President Indian World Forum in a tweet said, ” called the development as “alarming” and one that “abused the sanctity of the holy place”.

In a separate incident, Anas Haqqani, leader of the Haqqani network and part of the Afghan Taliban dispensation was seen praising Mahmud Ghaznavi and his action of “smashing the idol of Somnath”.

Haqqani, who spent the early days of his life in Pakistan had visited the grave of Mahmud Ghaznai to pay homage to him. In a tweet, he said, “Today, we visited the shrine of Sultan Mahmud Ghaznavi, a renowned Muslim warrior and Mujahid of the 10th century. Ghaznavi (May the mercy of Allah be upon him) established a strong Muslim rule in the region from Ghazni & smashed the idol of Somnath.”

The developments come even as the Taliban has been pledging to support the right of minorities. But the group is already seen reneged on their promises when it comes to women’s right and an inclusive government in Kabul. There are no women and members of the minority Hazaras in the Taliban government. Almost more than 30 members of the cabinet had 17 members on the UN terror list.

The number of Afghan Sikh and Hindu minorities have drastically reduced in the country. 2018, the Jalalabad suicide attack saw 19 members of Sikh community being killed. Since then, many have come to India and found refuge in the country. In the month of August, India brought back many members of the Sikh/Hindu community from the country amid the turmoil as Kabul fell to the Taliban. This included 2 Afghan Sikh MPs–Anarkali Honaryar and Narendra Singh Khalsa.

The situation of minorities under the Taliban in the 1990s was bad and included rules like wearing yellow bands as a mode of identification. The group had back then blown the historic Bamiyan Buddhas leaving the world in a state of shock.